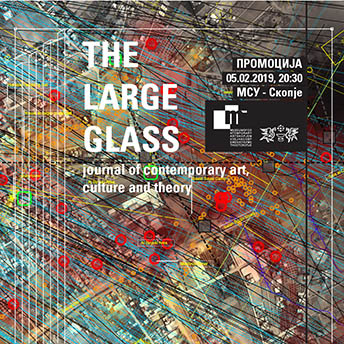 The Large Glass, Journal of contemporary art, culture and theory

REINVENTING THE HORIZON OF VISIBILITY

Conceiving a vision of a different society, inventing new modes of ethical, political and aesthetic dimensions, is an increasingly difficult but pressing challenge. Artists are exceptional in this regard insofar as they demonstrate an intersection of creative routes and the formation of alternative visions. Artists have long taken an active role both in demonstrating their connections with social movements and political activism and in producing new imaginaries. The importance of such artistic practices can begin to be grasped when we consider what artists are already doing in terms of reinventing possi­bilities and generating new forms and knowledge – not only what we have already learnt but what we can still learn from their experiences, successes and failures. Working outside of established ‘common sense’, disputing and disrupting what is ‘visible’, artists express their strong disagreement and resistance to current conditions and alter our perceptions and understanding of a politically marked spatiality. They act in a field where ‘politics is first of all a battle about perceptible and sensible material’1 – one that revolves around what can be seen and sensed and by which politics is brought to visibility, so that it ‘renders an object, event, practice, or person at once visible and available for account­ability.’2 The horizon of visibility in this context is shaped and framed by power relations: ‘Foucault illustrates that during different historical periods, distinct modes of visibility are produced by power in order to control society.’3 Hence state authorities and powerful bodies often develop the technology of a disciplinary order, or in Rancière’s words a ‘distribution of the sensible’, in order to impose their regime over visibility and modes of perception – a regime that ‘provides the political life of sensation.’4 This is enforced by decisions, policies and values driven by governing and powerful bodies. This leads us directly to Berkeley’s claim that ‘to be is to be perceived’5 – or in the specific thematic discussion that what is perceived in a society is associated with an ‘ontological ground’, or in this context into existence within the social sensorium.

The argument can be supported with examples of artists’ joint practices and modes of re-configuring sensory experiences, which enable some subject-agents to regulate what is visible and what is not. These practices counter and resist predominant politi­cal trends, whatever the political mainstream may be, through various forms of direct intervention. These acts can be delineated as ways and methods aimed at something arbitrarily below a social horizon of visibility, or else at provoking issues proscribed in relation to it. This calls for and entails the creation of a new vision, for perceiving new contours and participating and constructing moments beyond and counter to regimes of appraisal that ‘customarily organize the world, compelling us to have to reconfigure our own postures’6 in opposition to the world as it is. It includes reflections that provide an innovative and comprehensive understanding of the role of art, which in radical instances achieves ‘a collapse of the representational paradigm, which means not only the collapse of a hierarchical system of address; it means the collapse of a whole regime of meaning’.7

Accordingly, the main thematic scope of this edition of The Large Glass is that of activist art as a form of political protest. It is a common practice in urban landscapes, manifested in various actions, from the occupation of buildings to the use of walls for displaying messages, creating resistance that transforms public spaces. Examples include artists protesting in key public spaces to raise the visibility of certain commu­nities such as refugees forced to leave their homes ‘because of war, environmental waste, and famine, marginalized and simultaneously subjected to a new form of slave exploitation8 at a time when, as Berardi points out: ‘the massive internment of migrant workers in detention centers disseminated all over the European territory dispels the illusion that the “camp” has been wiped out from the world.’9 The level of complexity of these artistic practices can be interpreted as a result of their being attempts to reassess the current visual horizon and to challenge existing boundaries of spaces of power. To some extent these efforts constitute a critique of museums and galleries as tools that serve to maintain the capitalist system and the ways in which capitalism commodifies artworks and instrumentalises artists. Some examples recently made public seem be the subject of great attention, such as cases where collective artistic groups and individuals have attempted to decolonise the domain of museums through direct interventions. This mode of acting is most evident in the case of interactions between protesters, artists and audiences in various movements in which artists have protested and occupied cultural institutions along with the movement. Aside from exploring the possibility of occupying museums, artists have redirected their creativity from instrumental participation in the art world to an expanded field of collaborations in order to produce a new vision and political imaginary.10 What this means is that practices interrupt ‘a set of principles by which a given society and art institutions are symbolically staged’11 and where specific visibility is experienced and meanings are established.

Other papers and reports in the second part of this issue highlight engaged visual methodologies that present an equally important approach, urging the use of visual materials and data to engage in concrete cases of symbolic, political and legal prosecu­tions. This is one way in which artistic practices can heighten public focus and connect artworks as a tool for visualising data and visions for justice founded upon evidence and intended to achieve profound effects. These actions are anchored in everyday political situations and have both a responsibility and intensity – aiming to challenge and reorga­nize societal visibility while pushing back what is hidden by official institutions. The ideas examined in this part relate to the recuperation of data and the rebuilding of an ‘image’ of what was the case before, which opens new possibilities for artists in creating a horizon of visibility, bringing visual data to light for public scrutiny and highlighting official concealment, neglect and distortion, as well as unjust and oppressive acts by state authorities and official narratives. The focus is on achieving a set of new interpretations, as in the case of Forensic Architecture, and this issue considers ways in which artists collaborate with scientists and follow technological developments to present visual data that can play a valuable role in legal forums. These methodologies have been used to highlight violations of humanitarian law and war crimes. This part of The Large Glass includes more extensive combinations of present, historical and comparative data and analysis, presenting some recent artistic works as well as theoretical insights that afford a deeper understanding of engaged art in this context.

The third part of this journal presents a sequence of different artistic works devel­oped in relation to certain spatialities, thus contributing to an understanding of the ways in which politics and ideologies are associated with the organization of spaces and visi­bilities. These artistic examples highlight an important link between regimes over certain spaces as well as their inconsistency throughout history.

Along these lines, this issue of The Large Glass presents a range of contexts in which artistic practices coexist with further possibilities. As the following papers, interviews, reports and other materials show, the status of engaged artistic practices continues to raise questions in important debates and practices, especially reflecting on the complex connotations of artistic visions that challenge the paradigm.

The Large Glass Journal is a publication of the Museum of Contemporary Art Skopje (http://msu.mk/). It’s published only in English.